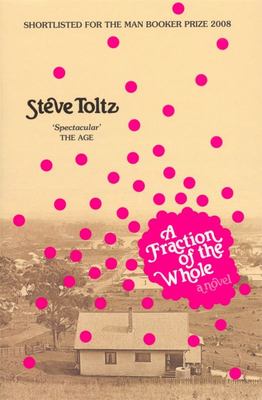 A Fraction of the Whole

The Father is Martin Dean.He taught his son always to make up his mind, and then change it. An impossible, brilliant, restless man, he just wanted the world to listen to him - and the trouble started when the world did.The Uncle is Terry Dean.As a boy, Terry was the local sporting hero. As a man, he became Australia's favourite criminal, making up for injustice on the field with this own version of justice off it.The Son is Jasper Dean.Now that his father is dead, Jasper can try making some sense of his outrageous schemes to make the world a better place. Haunted by his own mysteriously missing mother and a strange recurring vision, Jasper has one abiding question: Is he doomed to become the lunatic who raised him, or a different kind of lunatic entirely?   From the New South Wales bush to bohemian Paris, from sports fields to strip clubs, from the jungles of Thailand to a leaky boat in the Pacific, Steve Toltz's A Fraction of the Whole follows the Deans on their freewheeling, scathingly funny and finally deeply moving quest to leave their mark on the world.

Steve Toltz was born in Sydney. His first novel, A Fraction of the Whole, was shortlisted for the Man Booker Prize and the Guardian First Book Award. afractionofthewhole.com.au Facebook http-//stevetoltz.com